The earliest reference found so far indicates that there was a settlement in this district at least as early as the reign of King Edward the Confessor, but it is not until 1270 that we have a reference to the church of ‘Sancte Marie Tavi’ on the resignation of the first known Rector, Roger de Okeston.  From that date, with a few gaps, the Rectors can be traced to the present day.

It is believed that the Norman Church stood on the site of the nave of the present building.


In the fifteenth century a great religious revival swept through the South West and the church was pulled down and rebuilt in the perpendicular style of architecture.

In Victorian times there was an extensive restoration in accordance with the tastes of the period and the building was extended by approximately 6 feet.

The church can claim to be one of the first parishes to be influenced by the Oxford Movement (also known as Tractarians), when in 1835 the Rector, the Revd Anthony Buller published one of the ‘Tracts for the Times’.

The only remaining medieval roofing is found in the Porch.

The Incumbents Board lists all known Rectors from 1270.  Of particular note are the three dissenting ministers – “Intruders” – appointed in succession during the Commonwealth until the Restoration in 1660.

The Windows are very beautiful and are in the style of the artist C E Kempe, although they do not bear his characteristic wheatsheaf logo.

The Screens were erected in 1894 and are the work of the Misses Pinwill, daughters of the then Rector of Ermington.

The Rood figures and the Angels were imported from Oberammergau.

The Norman piscina is in the south wall of the Lady Chapel.

The Ancient Graveyard contains some interesting listed tombstones and the grave of William Crossing, the well-known writer on Dartmoor.  It was extended in the 1880s to include a large part of the former village green including the 15th century preaching cross. 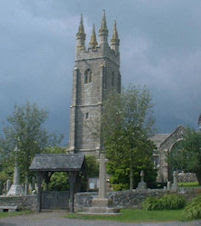